Say Hellooooo to Some Spooky Species!

October is no stranger to cloudy weather, howling winds and creepy crawlies. Here is one spooky species that weighs only 6 to 8 grams: the Keen’s Long-eared Bat. At a tiny 2 centimetres long, this mammal’s ears are about one-quarter the size of its body. And you thought your class photo was awkward! 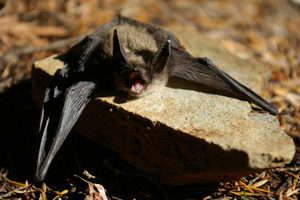 What it looks like: 2 centimetres long, with dark brown wings and fur. It has a light brown belly and dark spots on its shoulders.
What it eats: moths, beetles, flies, and other insects. Yum!
Where it lives: almost entirely in coastal British Columbia, though some have been spotted in Alaska and Washington. A large majority are found on Haida Gwaii and Vancouver Island.
Daytime yogis: bats are nocturnal, so in the daylight hours you can find these mammals in rock crevices and hollow trees, hanging upside down (talk about zen!). They also hibernate in the winter.
What’s at-risk: Keen’s Long-eared Bats love the old-growth and mature forests of B.C. Activities such as logging and mineral extraction not only compromise their habitat, but industrial noise and shaking can affect their roosting (group naptime) or raising of young. The Keen’s Long-eared Bat is on the provincial Red List in B.C. (endangered or threatened) and designated as a species of Special Concern throughout Canada by the Committee on the Status of Endangered Wildlife in Canada (COSEWIC). In 2003, COSEWIC noted there is insufficient data on these tiny mammals.

How you can help:

Other Spooky Species in B.C.:

~ Copied from the Sierra Club, B.C.