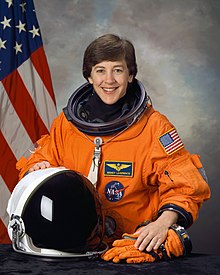 The free event in honour of the Week of International Women’s Day takes place at the Abbotsford International Airport March 12-13, 2016. Over 15,000 participants from around BC and beyond are expected at the family-friendly event. Several remote school districts such as Prince Rupert, Clinton, Lillooett and Comox are among those sending students to meet role models like Lawrence and Tremblay.

In addition to conquering the ultimate frontier (space) Lawrence is also a retired US Navy Captain and helicopter pilot. Her helicopter experience includes hundreds of shipboard landings, helicopter combat support and antisubmarine squadron operations. Lawrence is the first female graduate of the US Naval Academy to fly into space, and has flown four space missions including a visit to the Russian Space Station MIR. Lawrence is also an engineer with a Masters of Science in Ocean Engineering. Tremblay has a Masters degree in Aerospace Engineering specialized in Space Technologies. She is presently the Manager of the Project and Program portfolio and heads the corporate investment management bureau at the Canadian Space Agency (CSA). Previously, Tremblay worked as senior engineer and technical manager in international space exploration projects, particularly in connection with NASA’s Phoenix Mars Lander in 2008 and the James Webb Space Telescope, successor to the Hubble Telescope, with a planned 2018 launch.

Aside from the thrill of meeting space experts, free flights are offered to female first-time fliers of all ages to draw the females to the airport and pique their interest in further exploring the hands-on ground activities. As well, all participants (male and female) are encouraged to try their hand at many aviation.   Participants can expect to see aircraft and tactical assets from The Royal Canadian Navy, Royal Canadian Air Force, Canadian Army, Canadian Coast Guard, RCMP, Cadets, US Air Force, US Navy, Civil Air Search & Rescue, plus civilian and education partners from Aviation, Aerospace, Marine and Defence.

The event is open to the public and families are welcome – including the guys! The events are completely free to ensure no barriers to participation. This is thanks to the generous support of industry and community partners such as the University of the Fraser Valley; Teck Construction; Government of British Columbia, Ministry of Jobs, Tourism and Skills Training; Abbotsford International Airport, Vancouver Airport Authority, Cascade Aerospace, BCIT, Bert’s Electric, Aerospace Industries Association of Canada and others. The Sky’s No Limit – Girls Fly Too! events are part of an outreach initiative founded by BC pilot Kirsten Brazier in 2012. Events are held annually during the week of International Women’s Day and in celebration of past, present and future women in Aviation, Aerospace, Marine and Defence. Events organized by The Sky’s No Limit – Girls Fly Too! have won several international awards and already set three world precedents as the largest single outreach event of their kind.

Despite the best recruiting and retention efforts of many, the number of women in technical and top executive/command areas in aviation, aerospace, marine and defence remains appallingly low. Out of 24,505 professional pilots in Canada, only 5.5% of them are women. Out of 19,601 aircraft engineers, only 2.8% of them are women. Less than 3% of the technical/top command positions in the Canadian Forces are women. From the numbers it would be tempting to conclude that women are either uninterested or unwelcome in these fields. Instead, studies have shown that a common perception persists that aviation, aerospace, marine and defence are industries reserved for men. From an early age, male and female alike are affected by this perception message, which is continually reinforced by observation (lack of change), media, social media and advertising.

The Sky’s No Limit – Girls Fly Too! employs a unique hands-on approach to capture the interest and attention of the missing female demographic. “From shop floor to top floor, we’re inspiring future leaders!” says Kirsten Brazier, Founder. Brazier is a professional pilot from the Lower Mainland, BC and she holds Airline Transport Ratings for both aeroplanes and helicopters. With 24 years of flying experience, Brazier has enjoyed a diverse career flying across Canada, US and the Caribbean on wheels, floats, skis and skids as well as twocrew operations in both aeroplanes and helicopters.