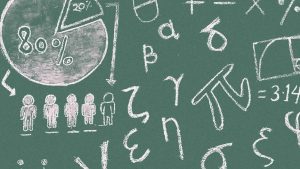 How Much Math Should Everyone Know? (Show Your Work.)

Did you use a polynomial equation today? When was the last time you calculated the volume of a sphere?

While human achievements in mathematics continue to reach new levels of complexity, many of us who aren’t mathematicians at heart (or engineers by trade) may struggle to remember the last time we used calculus.

It’s a fact not lost on American [and Canadian!] educators, who amid rising math failure rates are debating how math can better meet the real-life needs of students. Should we change the way math is taught in schools, or eliminate some courses entirely?

Andrew Hacker, Queens College political science professor and author of “The Math Myth and other STEM Delusions,“ thinks that advanced algebra and other higher-level math should be cut from curricula in favor of courses with more routine usefulness, like statistics.

“We hear on all sides that we’re not teaching enough mathematics — you know, that the Chinese are running rings around us,” Hacker says. “I’m suggesting we’re teaching too much mathematics to too many people. … I would say everybody doesn’t have to know calculus. If you’re going to become an aeronautical engineer, fine. But most of us aren’t. It’s a bit like saying everybody should learn Arabic because they may need it someday.”

Instead, Hacker is pushing for more courses like the one he teaches at Queens College: Numeracy 101. There, his students of “citizen statistics” learn to analyze public information like the federal budget, corporate reports, and police homicide rates. Such courses, Hacker argues, are an antidote to the numerical illiteracy of adults who have completed high-level math like algebra but are unable to calculate the price of, say, a carpet by area (82 percent failed to do this in a recent survey).

Hacker’s argument that most students don’t need higher-level math has been met with pushback from other math educators who say what’s needed is to help students develop a better relationship with math — earlier — rather than teaching them less math altogether.

Maria Droujkova is a founder of Natural Math, and has taught basic calculus concepts to 5-year-olds. (Hint: if you ask kids to build the Millennium Falcon out of Legos, doors open to all kinds of questions like “How many Legos did it take?” or “How do you build a circle out of squares?”) For Droujkova, high-level math is important, and what it could use in American classrooms is an injection of childlike wonder.

“Make mathematics more available,” Droujkova says. “Redesign it so it’s more accessible to more kinds of people: young children, adults who worry about it, adults who maybe had bad experiences.”

Pamela Weber Harris, a lecturer at the University of Texas at Austin and author of “Building Powerful Numeracy,”has a similar perspective. Harris says that American education is suffering from an epidemic of “fake math” — an emphasis on the rote memorization of formulas and steps, rather than an understanding, instilled early on, of how math can influence the ways in which we see the world.

“My tagline is, ‘Math is figure-out-able,’” Harris says. “If I have six times seven …and a student doesn’t know it, I’d love them to know. But if they don’t, then I might ask them, ‘Do you know three sevens?’ And if a kid knows three sevens is 21 and I need six sevens, then I just need to double 21, which is 42.”

Harris argues that “chunking” like this quickly leads children to higher math by showing that a complicated figure can be built from easier-to-digest composite figures. Students who learn these concepts early on, she says, may get more out of courses like algebra and calculus when they reach them.

“They’re finding the beauty in [math] because we’ve allowed them to construct those relationships,” Harris says.

“I’m going to leave it to those who are in mathematics to work out the ways to make their subject interesting and exciting so students want to take it,” Hacker says. “All that I ask is that alternatives, other options, be offered instead of putting all of us on the road to calculus.”