An interesting article from The New York Times: 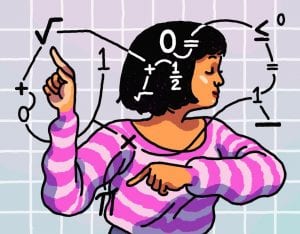 The way we teach math in America hurts all students, but it may be hurting girls the most.

Ms. Oakley is an engineering professor and the author of a book on learning.

For parents who want to encourage their daughters in STEM subjects, it’s crucial to remember this: Math is the sine qua non.

You and your daughter can have fun throwing eggs off a building and making papier-mâché volcanoes, but the only way to create a full set of options for her in STEM is to ensure she has a solid foundation in math. Math is the language of science, engineering and technology. And like any language, it is best acquired through lengthy, in-depth practice.

But for girls, this can be trickier than it looks. This is because many girls can have a special advantage over boys — an advantage that can steer them away from this all-important building block

A large body of research has revealed that boys and girls have, on average, similar abilities in math. But girls have a consistent advantage in reading and writing and are often relatively better at these than they are at math, even though their math skills are as good as the boys’. The consequence? A typical little boy can think he’s better at math than language arts. But a typical little girl can think she’s better at language arts than math. As a result, when she sits down to do math, she might be more likely to say, “I’m not that good at this!” She actually is just as good (on average) as a boy at the math — it’s just that she’s even better at language arts.

Of course, it’s hard to know what’s taking place in the minds of babes. But studies revealing developmental differences between boys’ versus girls’ verbal abilities alongside developmental similarities in boys’ and girls’ math abilities — combined with studies that show that among girls, self-perceived ability affects academic performance — seem to indicate that something like the above dynamic might be going on.

Unfortunately, thinking you’re not very good at something can be a quick path to disliking and avoiding it, even if you do have natural ability. You can begin to avoid practicing it, because to your mind, that practice is more painful than learning what comes more easily. Not practicing, in turn, transforms what started out as a mere aversion into a genuine lack of competence. Unfortunately, the way math is generally taught in the United States — which often downplays practice in favor of emphasizing conceptual understanding — can make this vicious circle even worse for girls.

It’s important to realize that math is, to some extent, like playing a musical instrument. But the instrument you play is your own internal neural apparatus.

When we learn to play an instrument — say, the guitar — it’s obvious that simply understanding how a chord is constructed isn’t the equivalent of being able to play the chord. Guitar teachers know intuitively that the path to success and creativity at the guitar is to practice until the foundational patterns are deeply ingrained. The word “rote” has a bad rap in modern-day learning. But the reality is that rote practice, by which I mean routine practice that keeps the focus on what comes harder for you, plays an important role. The foundational patterns must be ingrained before you can begin to be creative.

Math is like that, too. As the researcher K. Anders Ericsson has shown, becoming an expert at anything requires the development of neural patterns that are acquired through much practice and repetition. Understanding is part of acquiring expertise, but it certainly isn’t all. But today’s “understanding-centered” approach to learning math, combined with efforts to make the subject more “fun” by avoiding drill and practice, shortchanges children of the essential process of instilling the neural patterns they need to be successful. And it may be girls that suffer most.

All American students could benefit from more drilling: In the international PISA test, the United States ranks near the bottom among the 35 industrialized nations in math. But girls especially could benefit from some extra required practice, which would not only break the cycle of dislike-avoidance-further dislike, but build confidence and that sense of, “Yes, I can do this!” Practice with math can help close the gap between girls’ reading and math skills, making math seem like an equally good long-term study option. Even if she ultimately chooses a non-STEM career, today’s high-tech world will mean her quantitative skills will still come in handy.

All learning isn’t — and shouldn’t be — “fun.” Mastering the fundamentals is why we have children practice scales and chords when they’re learning to play a musical instrument, instead of just playing air guitar. It’s why we have them practice moves in dance and soccer, memorize vocabulary while learning a new language and internalize the multiplication tables. In fact, the more we try to make all learning fun, the more we do a disservice to children’s abilities to grapple with and learn difficult topics. As Robert Bjork, a leading psychologist, has shown, deep learning involves “desirable difficulties.” Some learning just plain requires effortful practice, especially in the initial stages. Practice and, yes, even some memorization are what allow the neural patterns of learning to take form.

Take it from someone who started out hating math and went on to become a professor of engineering: Do your daughter a favor — give her a little extra math practice each day, even if she finds it painful. In the long run, she’ll thank you for it. (And, by the way: the same applies to your son.)

Barbara Oakley is an engineering professor at Oakland University in Rochester, Mich., and the author of “Learning How to Learn.”