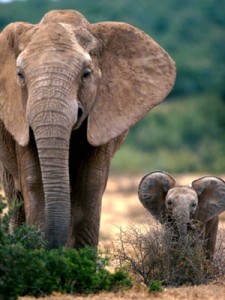 Elephants are an extremely important animal population, both biologically and economically. They’re known as a “keystone” species because of their significant influences on other animals and on African and Asian ecosystems.

Elephant populations in parts of Africa and Asia have rapidly declined over the last twenty years. They face many threats, including deforestation, humans moving into their territories, weak park management and the booming illegal international trade in ivory products, made from their tusks.

The International Fund for Animal Welfare is working with the Bioacoustics Research Program (BRP) at Cornell’s Laboratory of Ornithology on an Elephant Listening Project. This groundbreaking work records elephants’ low-frequency “infrasounds,” or rumbles, which human ears cannot hear. This acoustic monitoring system enables wildlife experts and regional and national governments to assess and monitor the numbers and health of elephants by listening in on the sounds they make.

Now you can hear the secret rumblings of African Forest Elephants! Click Hear To Listen.

The Elephant Listening Project started in 1999 with the focus on forest elephants, a sub-species of the African elephant, which live in deep equatorial rainforests where sightings are rare and getting an accurate count of their numbers is impossible. Elephants make powerful infrasonic calls (below the level of human hearing) which travel long distances. Those calls are then analyzed with visual observations to understand elephant numbers and behaviors.

Acoustic monitoring can be used to determine migration patterns, hotspots of elephant activity, and responses to rapid environmental or habitat changes resulting from logging, mining, or human settlements. Recordings from elephant habitats also provide information on human activities, including gunshots and vehicle noise which helps to identify poaching threats. Unlike other monitoring efforts, acoustic monitoring causes almost no disturbance to local wildlife.

Biologists and acoustic engineers are working in two sites in Africa: Dzanga-Sangha National Park in the Central African Republic and Kakum National Park in Ghana. In the first year of the project, field biologists saved more than 17,000 elephant calls from Dzanga-Ndoki National Park. This information provides important insights into the behaviors of forest elephants and their age, sex, known associations, individual elephant characteristics, and how elephants experience their many-layered social world.